Secondary breast cancer – also known as metastatic, advanced or stage IV breast cancer – is a cancer that has spread beyond the breast to other parts of the body. It’s an awful fact that 31 women die from this disease every day and yet the public remain largely uninformed about the disease’s common signs and symptoms.

In light of this we sat down to talk to our good friend Sally Nyland. Sally was diagnosed with breast cancer in 2019 and is now living with secondary breast cancer. Sally has worked tirelessly to raise awareness throughout her “Cancer Shit Show” (to quote Sally), we wanted to assist in any way we could, and so we are sharing her story here. We invited her into the Cabyn showroom to talk about her life, her diagnosis and why two organisations in particular are so important to her.

Tell Us About Yourself Sally?

I’m Sally aged 45, wife to Steve and Mother to two gorgeous sons, James, 19 & Joe, 17. We also have a 10 year old black lab called Stanley. I previously worked as a Family Visitor for the Local Authority, supporting families with children under 5 around parenting routines & skills, boundaries, and play, often supporting children at risk of being taken into care.

When and how did you find out you had Breast Cancer?

It was 2019, I noticed I had swelling under my armpit. At the time I didn’t think it was significant, in fact I thought I had just put on a bit of weight. I didn’t really think about it, I certainly didn’t think it was a sign of breast cancer, it never occurred to me as I didn’t have a ‘lump’. But as time went on I noticed it got bigger and I happened to be scrolling through Instagram one morning, ‘This Morning Live’ was on at the NEC and Jack Fincham one of the Love Island contestants was holding up a sticker for the Change and Check campaign. On here was a list of the signs and symptoms and I saw ‘Swelling In Armpit’ listed. I went to my Doctors, and even though he couldn’t detect a lump he trusted that I felt there was something wrong and so referred me to the Breast Clinic.

I had a mammogram but it didn’t show any cancer at all, as I have dense breast tissue – who knew that was a thing! What they could see was enlarged lymph nodes so I was sent for an ultrasound and this highlighted massive areas of cancer. I also had a biopsy. I knew then it was cancer, and a week later it was confirmed, I had Triple Negative Lobular Invasive Breast Cancer.

That was the other thing I hadn’t realised, just how many forms of breast cancer there were. Mine was unfortunately one that was tricky to treat as it’s not very responsive to targeted or immunotherapies and it’s the one with the highest rate of recurrence. When you walk into a room and you’re greeted by a breast surgeon, a breast care nurse, and a health care nurse, you know that they’re not going to give you good news. The team were wonderful and layed out the options but because it had spread so significantly, it was under my arms, up lymph nodes, across my clavicle, I had 12 weeks of Chemotherapy weekly, first before having a mastectomy. I didn’t make my final Chemo as my appendix had decided it had enough. My mastectomy was in December 2019 and then Radiotherapy from February. I was then sent on my way with no evidence of disease and told to come back for an annual mammogram. Around June I was offered an Ultrasound and a CT scan, everything came back clear. I still however had niggling pains in my back, which I had all the way through Covid. I went back twice to say I had these pains. I was checked over both times, (the second time being around August) and they said it was “post radiotherapy pain” and that it was my body recovering. I went back a third time in November, and it was only then they found, via CT scan, that I had cancer in my ribs and parts of my spine. That’s when I got the Stage 4 diagnosis. I had all the signs and symptoms of Secondary Breast Cancer and it’s my belief that it was there when I had gone that August.

When did you learn about the signs of Secondary Breast Cancer?

It was because I was part of the online community and was seeing and reading about these signs. The more I looked at this the more I thought that was me. I was probably in denial a little too around September. And the pain got so much more intense then, and I was also seeing more about the signs and I realised I was ticking a lot of the boxes. It was when the pain was waking me up in the night and the pain killers weren’t touching it that I knew.

We know your family and friends have been a brilliant support, but what other support do you think you would have benefited from?

I definitely feel that after I’d finished my treatment for primary breast cancer there should have been more information about what to look for with secondary.  I think I would have benefitted from access to more support but a lot was affected by Covid and this probably had an affect on the support I got, and my experience will be different to someone else’s.

How have you found the online community?

There are so many forums and support groups. I did get scared by a lot of what I was reading and seeing. I was primary at that stage and to read about people dying did scare the hell out of me. I did leave some forums but I stayed with Breast Cancer Awareness UK Support Group and some others, but it was towards the end of last summer that two organisations came up. These were Make 2nds Count and METUPUK. They both have Facebook, Instagram and Twitter platforms. I joined those and that is where I was getting my information from about the signs and symptoms of Secondary Breast Cancer.

I knew that they had links with the NHS and researchers and I trusted the information. I got a lot of support from people linked to these organisations and they gave me the courage to go back for a third time.

What inspired you to get involved in these two campaigns?

I’ve been involved in a few campaigns before, in particular the Change & Check campaign will have a special place in my heart as that was how I found my primary diagnosis. I’ve always been a do-er and I probably take on more than I should, but it’s because I want to help. They helped me so I have to make my time count. I know the way my story will end, it’s going to end sooner than it should, so I need to do what I can to make things better for those that come after me. That’s what drives me. I need to make my life count for something. People talk about me being an inspiration and leaving a legacy but it’s simply me feeling it is the kind thing to do for others.

In terms of making things better, what do you want to see change or made better?

I myself have had an education from these two organisations in terms of where there are inequalities between primary and secondary breast cancer research and funding. A lot goes to primary, as it should, but what are the pathways for secondary patients to access the same? There isn’t any real information out there for the primary group, what to look for, signs and symptoms, the red flags. It’s like no one wants to talk about it. You have to talk about it! When 1 in 3 women who have primary go on to develop secondary breast cancer, something has to be done. If people have information about what to look out for, they can get checked earlier, get access to treatment earlier which, even though they have a stage 4 diagnosis will get them onto a line of treatment that gives them the best chance possible for a longer life.

Tell us more about these two organisations you are supporting?

Make 2nds Count is a charity working very hard to highlight Secondary Breast Cancer and they campaign for a year round initiative to bring this disease to the forefront of the public’s attention in order to prevent lives being destroyed.

Again the campaign is about fighting to be heard, getting access to funding and research. Taken from their press release today…..

Emma Hall, Head of Fundraising and Engagement, Make 2nds Count, says much media coverage has focused on checking for primary breast cancer but not for secondary. “So people are not being informed about the different signs and symptoms to look for. We need more education, support and research, and understanding that with secondary breast cancer you won’t be cured, you can only be treated.”

Make 2nds Count founder Lisa Fleming, 38, of Edinburgh, had no previous breast cancer diagnosis, warning signs or lump when she was told she had primary and secondary breast cancer. It had already spread to the majority of her bones and swiftly spread to her brain.

She says: “We desperately need people to be aware of this forgotten form of breast cancer. We need to change the narrative, raise awareness of the signs and symptoms of this disease and in turn save lives. And that needs to happen all year round, not just on an annual awareness day. 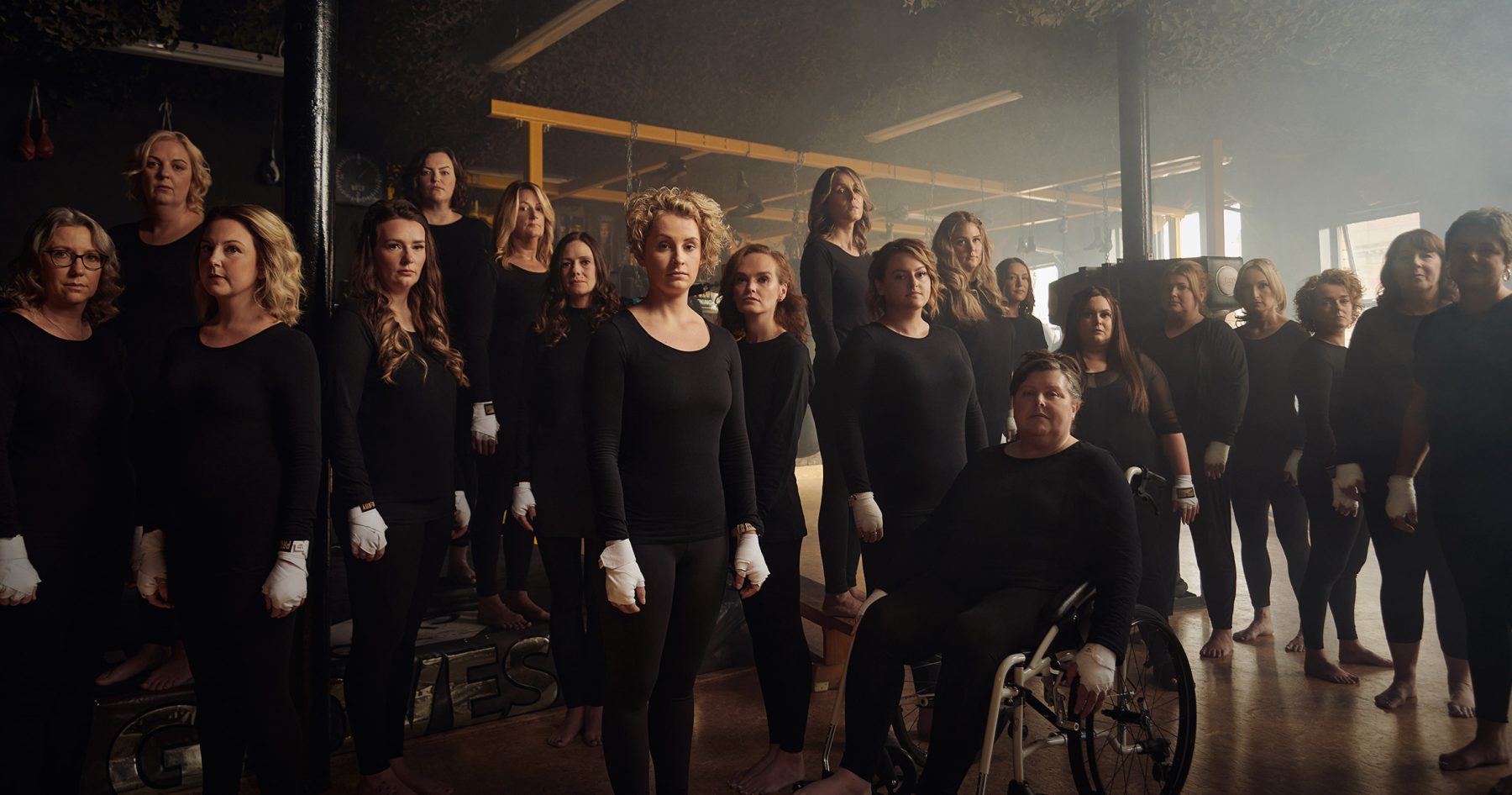 METUPUK is the UKs only Metastatic patient advocacy group. They are demanding change in policy, and aim to educate charities and government bodies, campaigning for Metastatic Breast Cancer to be an equal priority for funding, research and innovation.

METUPUK will give you advice and information and they can signpost to many different  trials. They really have their fingers on the pulse, you can’t help but get behind their passion and drive for what they are doing. There is a dark side to breast cancer, and that is secondary breast cancer, and the impact it has on people, their family and friends. The METUPUK  #IStandwiththe31 campaign asks for people to share and join the movement in solidarity with people living with secondary breast cancer, so that they are not forgotten. METUPUK have been releasing a video every day throughout the month, it really packs a punch. 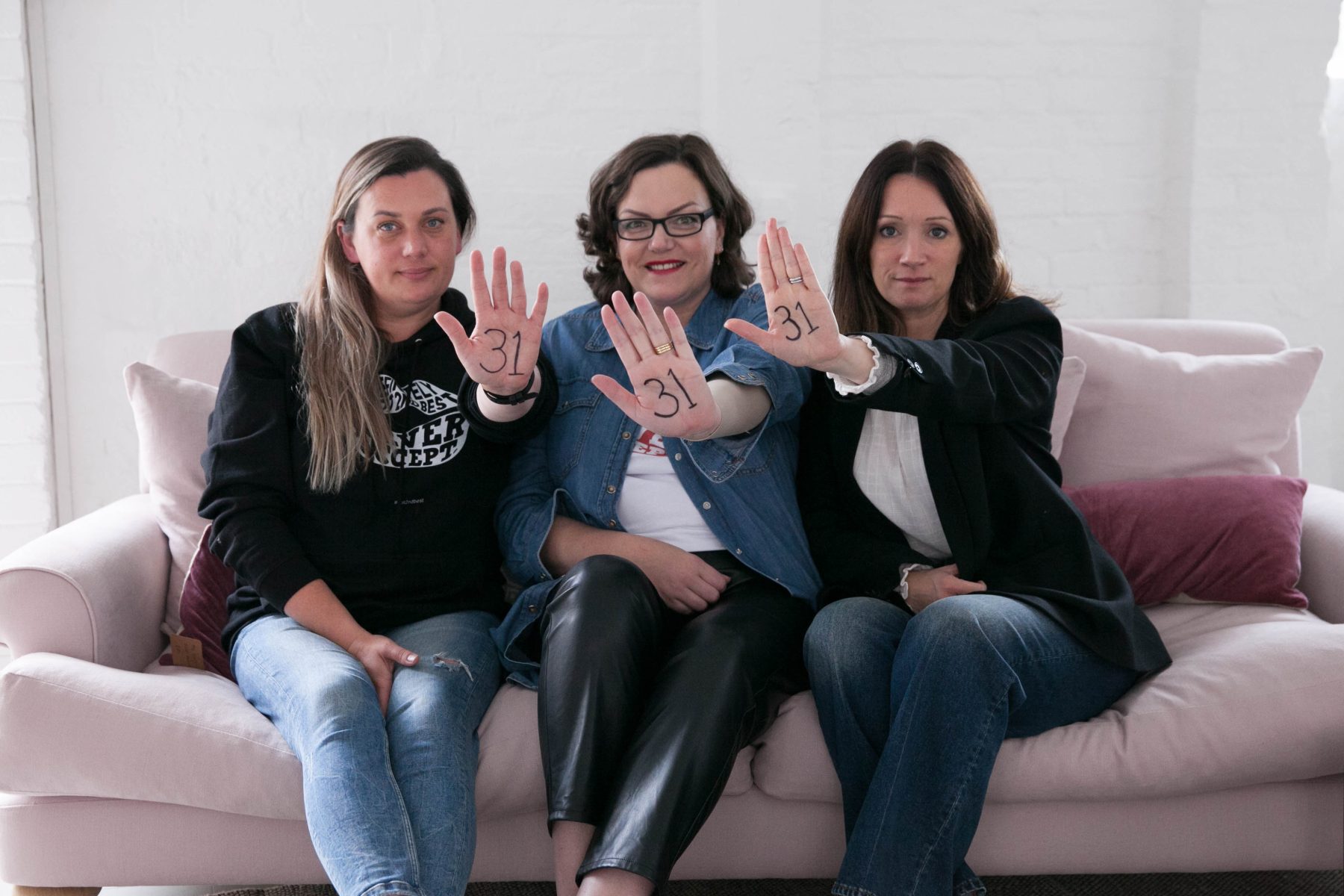 I would say get behind these as much as you can, share and raise awareness, if people know about the signs and symptoms earlier, and there is information, and research into drugs available, those people that do get that diagnosis can access help sooner. All we want is to live longer, and better. For me these are the two charities that encapsulate how I feel, and so I want to support them.

If you wanted to contact either organisation links are as follows.

We also wanted to share with you the METUPUK infographic showing the signs and symptoms of secondary breast cancer. 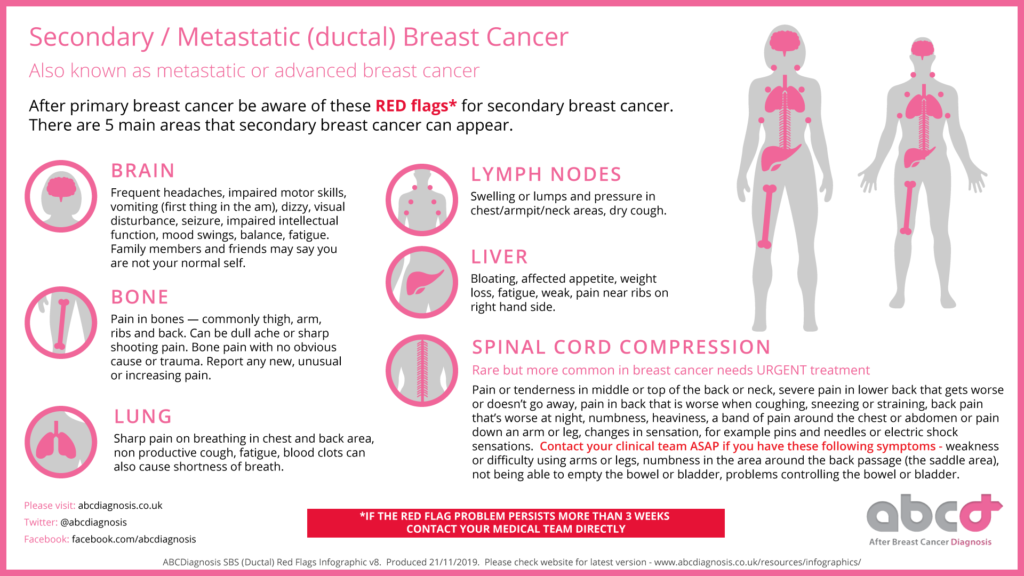 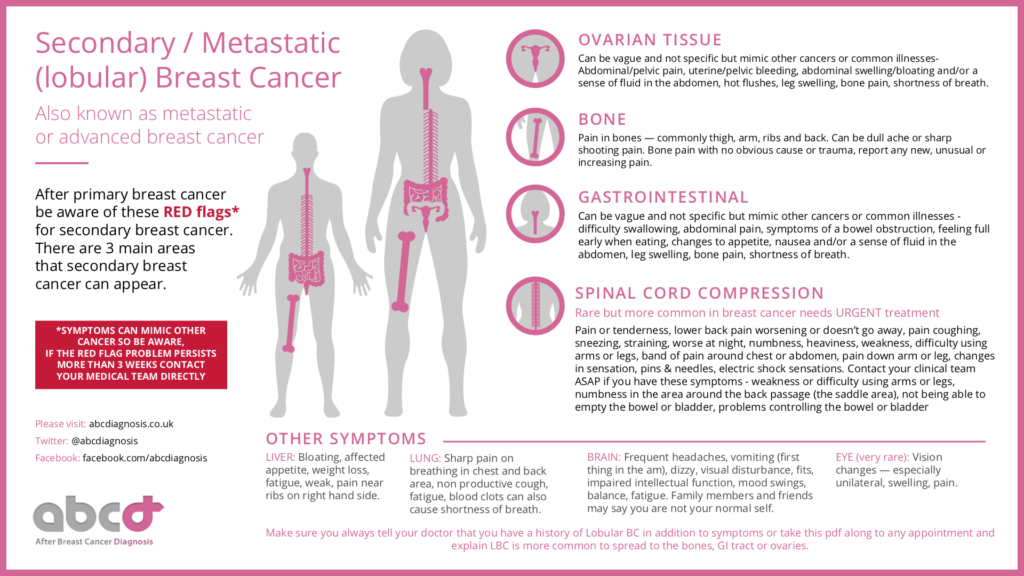